Young people are our most vital and inspiring resource, which is why we love engaging youth in all facets of Norwegian heritage and culture.

Just for Kids is a section of our award-winning Viking magazine dedicated to family programming. Every quarter, we share new projects that have been purposefully created for families to enjoy. This multi-generational, family-centered content and activities might also be the perfect addition to your next lodge event. We’re excited to share the complete archive of Just for Kids here. Look for the original content in Viking magazine, or grab the PDFs from this page to share with friends
and family! Color the basket of flowers, royal word scramble and did you know trivia. 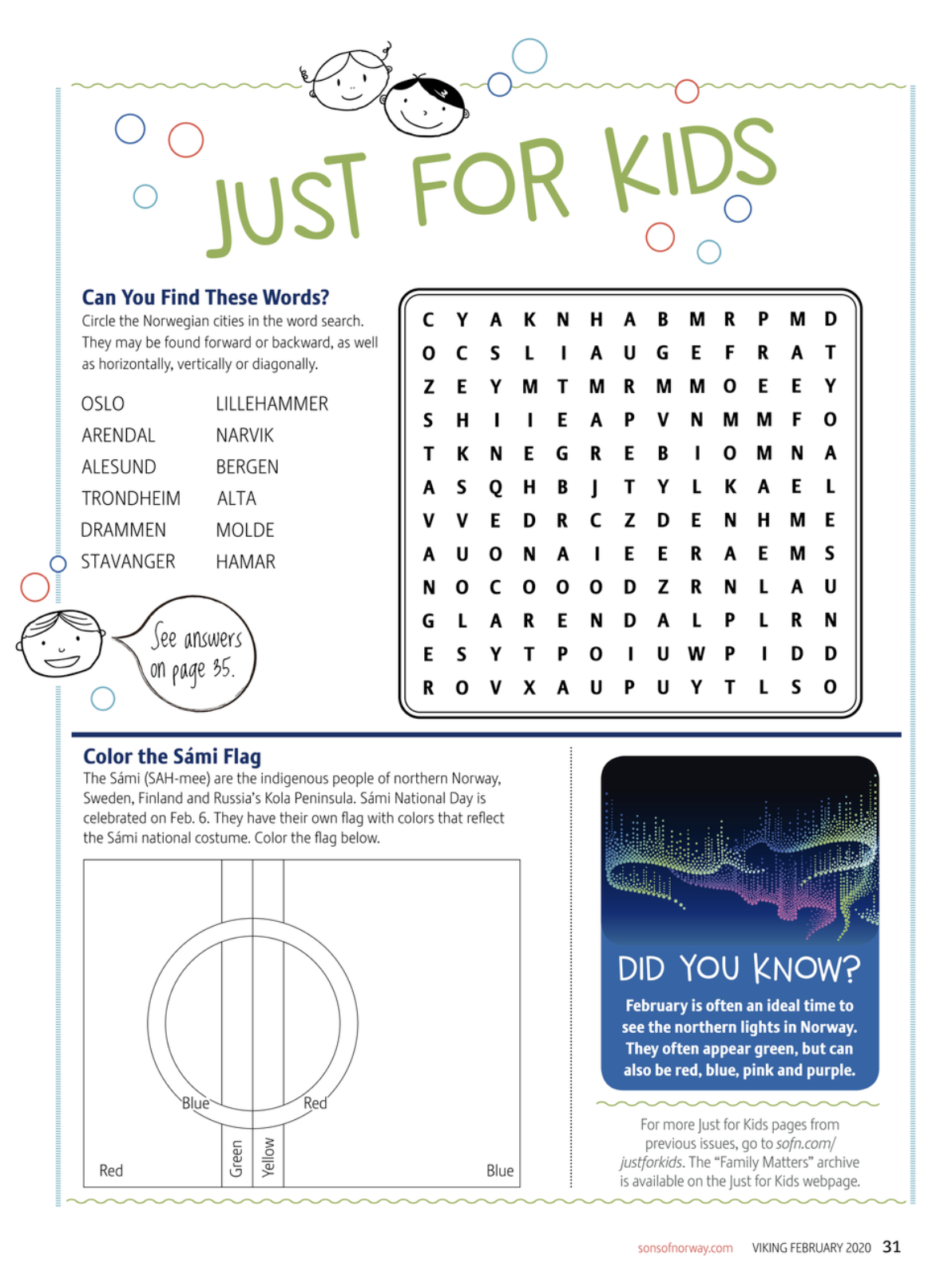 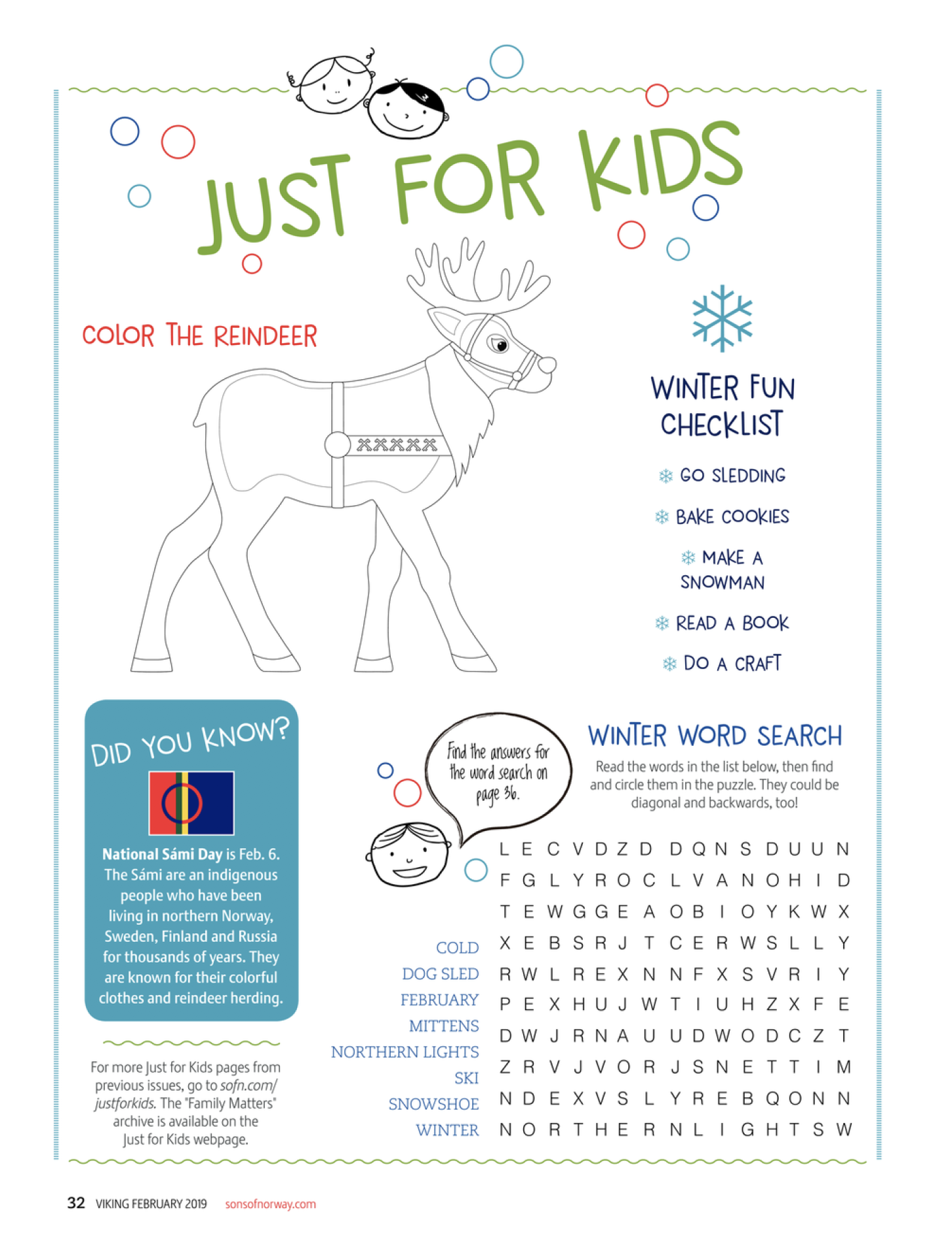 Color the Norwegian Bunad Pattern, How much do you know about Norway Crossword Puzzle.

Learn to say your favorite color in Norwegian. 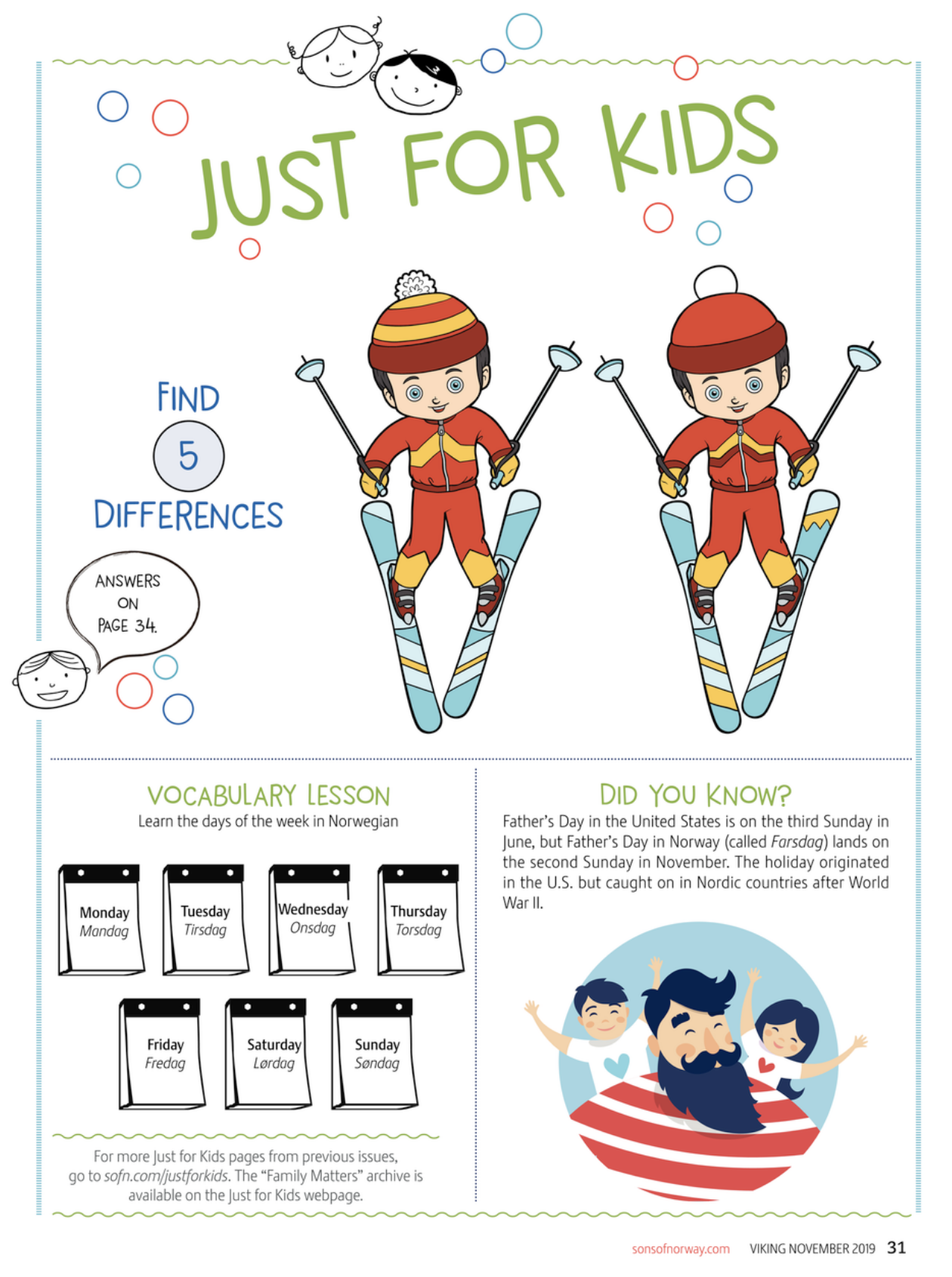 Find 5 differences, vocabulary lesson and did you know. Get ready to cheer on Norway in this year’s Winter Games.

In February, the world’s best athletes will descend on PyeongChang, South Korea, for the 2018 Winter Games. Competing in sports like cross-country skiing, speed skating, biathlon, ice hockey and curling, Norway is predicted to rank very high in the medal count. Prepare to cheer on your favorite Norwegians Feb. 9-25 by teaching the young people in your life about Norway’s participation. Check out our Just for Kids word search and word scrambler. Get into the holiday spirit with activities that can be passed down to the next generations.

From powdery snow and handmade gifts to caroling and the smell of lefse baking on the griddle, there is something so magical about Christmas. With the abundance of family gatherings throughout the winter season, it’s also the perfect time to teach the little ones about Scandinavian holiday traditions, and maybe even create some of your own — while sipping a toasty beverage (glogg for you, hot cocoa for the kids). Pass on Scandinavian food traditions to all generations.

Summer is the perfect time to gather your family or lodge and host a Scandinavian-themed meal. No matter the size, it’s an activity that both adults and kids can help with and enjoy. From preparing the food to making crafty table décor, it’s all about creating fun, relaxed moments that encourage family and friends to share Nordic traditions.

All About the Arctic

Teach little ones about the uniqueness and importance of the high north.

The Arctic region is found in the northernmost part of the Earth. It’s made up of the Arctic Ocean, parts of Russia, Greenland, Canada, the United States, Norway, Iceland, Sweden and Finland. The region is home to indigenous peoples, including the Sámi, who have adapted to one of the harshest environments in the world. It boasts a rich habitat for wildlife, such as polar bears, Arctic foxes, seals and birds, and it contains vast resources — freshwater reserves, fossil fuels and fisheries. It’s also an area of the world that’s quickly changing and deserves to be celebrated.

Help kids play detective to uncover stories through the generations.

Family history is shared in many ways, from celebrating holiday traditions, to photographs set on the mantle, to heirlooms passed down through generations. Oral histories also keep heritage alive, with parents and grandparents providing the characters and real events driving the plot. And since each storyteller’s unique perspective informs the narrative, listeners don’t just learn about their family heritage, they discover how the history has shaped their family members into the people they are today.

Jagged mountains, rocky island clusters, deep fjords — Norway’s landscape can be summed up in one word: dramatic. Far north you’ll find the midnight sun, where the sun shines for 76 days straight in summer. All across the country lie deep, calm fjords: narrow bodies of water that stretch far inland, formed when glaciers melted during the Ice Age. Exploring Norway’s notable landscape is a fun way for the whole family to learn about what makes the country so unique.

Celebrate heritage and history with the Norwegian language.

Originally a language of runes thought to bestow magical powers on anyone who could write with them, the Norwegian language is spoken by nearly 5 million people today. Learning a new language at an early age is not only great for developing young minds, it passes an important piece of culture through the generations. Norway has three offi cial written languages: Bokmål, Nynorsk and Sámi. It’s never too early to teach the young people in your life a new language.

Norse folk tales, mythology and legends represent the independence and spirit of Norway. Stories were passed on orally and kept alive by pure memory until the mid-1800s, when two Norwegians, Peter Christen Asbjørnsen and Jørgen Moe, began compiling the legends being told all over Norway. The folk tales combined the everyday life of ordinary people with worlds of fantasy, heroes, villains, supernatural beings, kings, trolls and gnomes.

Scandinavia’s indigenous people are a vivid part of the area’s history and culture.

For thousands of years, the Sámi (SAH-mee) have inhabited northern Scandinavia, in a region called Sápmi, which stretches across the high plains of Norway, Sweden, Finland and Russia’s Kola Peninsula. The Sámi have their own fl ag, language and Parliament. February 6 marks Sámi National Day, and celebrations abound!

In Tromsø, for example, the festivities span all of Sámi Week, where visitors can watch reindeer racing and lasso-throwing, sample food, attend art exhibits and take language classes. Recognize this day by teaching the young people in your life about the Sámi.

Teach your children about St. Lucia, the Scandinavian Festival of Light.

Next month, on Dec. 13, Scandinavians will honor the legend of St. Lucia, a young martyr known for her love and kindness. The day represents the start of the Christmas season and centers around faith, hope and light. Many families celebrate St. Lucia Day in their homes, while schools and churches have annual St. Lucia pageants. Kids can dress up for the holiday — girls wear white gowns and a crown of candles while boys don cone-shaped hats with silver stars — and the entire family can join in the fun!

Teach your little prince or princess about Norway’s royal family and monarchy.

For more than a century, Norwegians have admired their popular, down-to-earth royal family. As a constitutional monarchy, Norway has both a King and elected officials: the country’s Prime Minister and his council, who have the executive power, and the Storting (Norway’s parliament), who have the legislative power. While King Harald is formally the Head of State, his duties are mostly ceremonial. For example, he along with Queen Sonja, Crown Prince Haakon and Crown Princess Mette- Marit, often pay visits to other countries on behalf of Norway. Learn more about Norway’s royal family with the young people in your life.

Learn about the fearless seafarers who left Scandinavia and traveled thousands of miles in search of new lands.

The legacy of the Vikings plays a significant role in Scandinavian culture. To conquer new lands, these Norse warriors traveled west across dangerous seas to northern and central Europe, eventually landing in North America. One of the most famous explorers of all time is Leif Erikson, who was the first European to reach North America in 1002 AD. Some Vikings became farmers, craftsmen and traders, bringing with them Norse culture. Gather the young people in your life and learn about these brave explorers.

Pass on the tradition of figure carving to younger generations.

Norwegian figure carving is a fl at-plane style of woodworking that dates back to the mid-eighteenth century. The small figures were often used as children’s toys and were a source of income. This cultural skill is still alive today, and is best practiced alongside a knowledgeable adult—either a woodworking instructor or an experienced parent or grandparent. Here’s a great opportunity for you to learn a new craft together with the youth in your life.

A fun cultural skill to pass on to younger generations, Norwegian folk dancing is also a great way for families to stay active together. Put on your dancing shoes!\

Norwegian folk dancing is a popular activity for many Norwegian-Americans. For young people in particular, it provides an opportunity to learn about their heritage and culture, while being active and having fun. Engaging children early in life will hopefully spark a life-long passion for dance. Sons of Norway’s Cultural Skill on folk dancing is being revamped, so check it out for new ideas for beginner, intermediate and advanced dancers. Before embarking on the Folk Dancing Cultural Skills pin with the youth in your life, pique their interest in the tradition first with these fun ideas.

Share culture and fun with the young people in your life. It’s time to play some Norwegian games!

What games do you play with your children or grandchildren? Maybe you’ve tried the classics, such as Bingo or chess. But have you ever played Norwegian Bingo? How about Hnefatafl? Or Kubb? Not only are these Norwegian games fun for all ages, they also provide a great opportunity to teach children about Norwegian culture. With three different games or spill to choose from, you’re sure to find something everyone will enjoy.

Celebrate this year’s Syttende Mai – and the bicentennial of Norway’s constitution – with flag arts and crafts fit for all ages. A symbol of national pride, the Norwegian flag will fly high and bright for this year’s Syttende Mai, also the 200th anniversary of the Norwegian constitution, at celebrations in Norway and around the world. Norwegians wave flags in Syttende Mai parades, fly them above their homes and wear decorative ribbons bearing the flag’s colors.

Kids in the Great Outdoors

Spending time outside is a great way to inspire a love of nature and share your Nordic heritage with the young people in your life. This winter, embrace the Norwegian concept of friluftsliv (the outdoor life) and plan a family outdoor adventure.

Kids in the Kitchen

According to Scandinavian tradition, there should be at least syv slag (seven types) of cookies to serve to friends and family at Christmastime.

With Christmas cookies such a beloved part of the holidays, why not use holiday baking as an opportunity to connect with the young people in your life? Choose a favorite family recipe to make together. Or try this recipe for decorated julemenn (also known as kakemenn). It’s a Norwegian holiday favorite that kids love to decorate.

Exploring the family tree together is a great way for young people to learn about their history and understand the world.