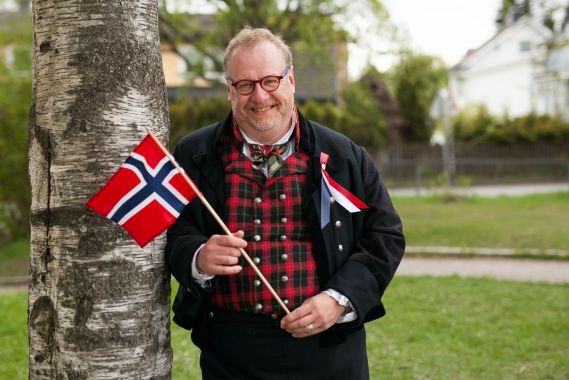 Thanks to the award-winning reality television show “Alt for Norge” it’s never been so exciting for Americans to connect with their Norwegian heritage. The show puts Norwegian-American contestants through a set of fun challenges in hopes of winning the chance to meet their relatives and $50,000.
The February issue of Viking goes behind the scenes of with the show’s producers and contestants to explore how “Alt for Norge” unites families, friends and cultures. Here, Season 3 winner Todd Ferris and Season 6 winner David Engen share more about their experiences.David Engen

Favorite challenge: I had two favorites. The first was in episode 2 when we walked in the steps of the men who successfully sabotaged the heavy water facility at Vemork in Telemark during World War II (1943). The challenge was to make our way into the plant, avoid the German soldiers guarding it, set the “explosives” and leave as quickly as possible. Despite my lousy cross-country skiing skills and tripping over my own feet while running, our team still won. My other favorite challenge was in episode 9. The focus was on Norwegian spirituality and mythology. The first challenge involved identifying Nordic gods and their stories, with a focus on the story of Baldur. This was done in a 17th-century copper mine in Røros, a very interesting and beautiful town. We were given torches to light the way and workmen’s helmets with horns glued on top, and were sent into the mine to find and answer clues and questions. Running through a dark mine with wet paths and uneven grade was challenging, but very fun. I’m not sure how I managed, but I got through all the obstacles and answered the questions correctly, which made it possible to rescue Baldur from his chains. It was so crazy and unlike anything I’ve done before. This August, join David Engen on a Borton Overseas tour!

His win: The very moment of winning took place on the rooftop of a monument, as I just finished flying the Norwegian flag to signal the victory. I was overjoyed and almost flipped myself over the edge by accident! We’d been working so hard at this for the prior nine weeks, and spent every day with that in our thoughts. To actually get there and complete that journey was unbelievable. I couldn’t sit still or stop smiling for the several hours that followed.

Best part of being on the show: Getting to see as much of Norway and experience as much of that culture as we did.

Hardest part of being on the show: Being away from my family for that long and not being allowed to communicate with them. Having two small kids (at that time) and a newly pregnant wife, it was hard to leave. However, Megan, my wife, was very supportive and urged me to go, as she knew this was a once-in-a-lifetime opportunity. I found myself having to be very busy while there, as I would constantly think about the family and miss them when we had downtime. I enjoyed every moment I was there, but definitely was anxious to get home when it was all over.

By Anya Britzius|February 15th, 2015|Categories: Blog|Tags: Alt for Norge, pop culture|Comments Off on “Alt for Norge”