Oslo is filled with unique and stunning architecture, and a few new buildings will soon be adding to the city’s cultural cache. While many beautiful new building projects have gone up in Oslo in recent years, here are a few noteworthy highlights to check out. 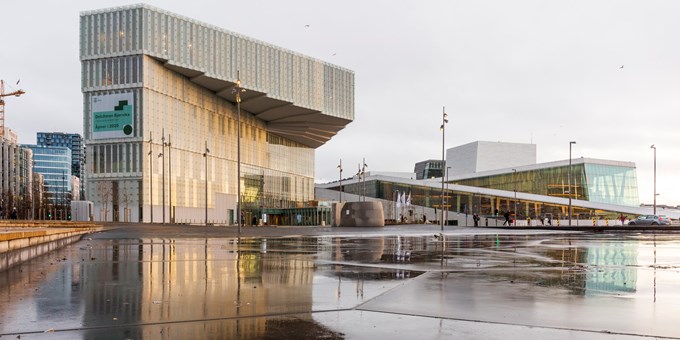 The new Deichman Library in the Bjørvika neighborhood is scheduled to open in Spring of 2020. The 19,600 square foot building is expected to draw over two million visitors a year. The project, initially planned for completion in 2016, ran into a number of snags during the constructions stages. But after a total cost of 2.5 billion kroner, Oslo’s new downtown public library is finally ready to open its doors, and it promises to be an exciting new addition to Oslo’s cultural scene.

Munchmuseet, an art gallery in Oslo dedicated to the life and work of Norwegian artist Edward Munch, is planning to open a new state-of-the-art facility in Fall of 2020. Displaying over 28,000 works in its 11 exhibition halls, it will be one of the largest museums in the world devoted to a single artist. The 13-story building is 58 meters tall with a dramatic exterior covered in a translucent, perforated aluminum, making it a stunning addition to the Oslo skyline. Valle Wood is a striking, beautiful office building made entirely of wood. It is the first of five unique buildings forming a state-of-the-art complex in central Oslo. Work began in 2017, and since its completion in 2019 the building has offered a unique space for co-working, startups, conferences and conventions. The office building was designed with timber for a very specific Nordic feel and was built using climate-friendly architectural practices—requiring 40% less energy consumption than a traditional office building. Valle Wood was nominated for the Architectural Prize 2019 by the Oslo Architects Association.

By Sons of Norway|April 12th, 2020|Categories: Blog|Tags: Oslo|Comments Off on Cool New Buildings in Oslo