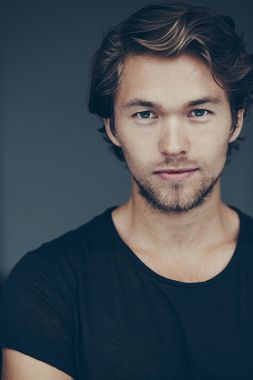 You may recognize actor Jakob Oftebro from hit Norwegian films such as “Max Manus: Man of War” and “Kon-Tiki.” He graduated from The Norwegian Academy of Performing Arts 2007 and continued his studies at The Danish National School of Performing Arts. We featured the actor in the June 2015 issue of Viking magazine and got the low down on his career, inspirations and upcoming film “Birkebeinerne.” Check out more from his interview below.

“My father is an actor, so I practically grew up in the theatre. I was very shy as a kid, but that changed when I became a teenager. I started in a theatre ensemble for kids when I was around 12 and thought it was fun. I’ve never been very good at sports, but I felt I had a talent for acting.”

“Both “Max Manus: Man of War” and “Kon-Tiki” were wonderful experiences for me. I loved working with Espen (Sandberg) and Joachim (Rønning), and some of the best actors in Norway.”

“There are so many good Scandinavian actors and directors. I am very privileged to work with both in Denmark and Norway. I am a big fan of Aksel Hennie and Mads Mikkelsen. They have both been a big inspiration for me. I know Aksel well, and he’s a wonderful colleague.”

“My future career goals are to continue improving myself, work hard to be as good as possible and try out different things. And of course continue acting. It is what I love and the only thing I am really passionate about.”

“I love Stavanger, and the mountains and beaches around it. Bergen and the fjords are just stunning and a must-see.”

By Anya Britzius|June 1st, 2015|Categories: Blog|Comments Off on Jakob Oftebro