Trolls, elves, dwarves and gods. These are just a few of the many fabled creatures that are deeply embedded in our popular culture, from comic books to movies to video games. But where did they originate? Many of them were actually inspired by Norse mythology and folklore. In the April issue of Viking, we dive into the marvelous world of Scandinavia’s mythical creatures. In it, you’ll read about Odin, Thor, Loki, Draugen, Kraken, Huldra and more. We loved the opportunity to feature the eye-catching illustrations from Irene Rinaldi. 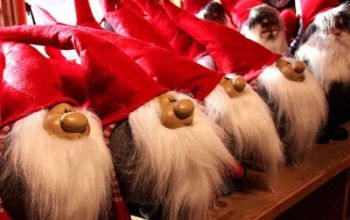 Here’s an additional creature to meet—Nisse.

These creatures generally appear more in local legends and Scandinavian culture than folktales. The gnome-like beings are known as the protective spirits of the farms and households in which they reside. Norse tradition says that every family has one.

Identified by their short stature, long white beards (on the males) and conical wool hats, nisser are typically associated with the winter holidays. While some see them as Santa Claus’ counterpart, that’s actually not the case. But some families do leave bowls of porridge out for them on Christmas Eve in case their nisse decides to join in the festivities.

Despite being only about three feet tall, they possess immense strength. This power comes in handy around the house, and a nisse is generally helpful and friendly if content. But their mischievous nature—and propensity for flying off the handle—can come out. So be sure their porridge is made how they like it, and don’t wake them too early in the morning.

Want to learn more about Norse mythology and saga literature? Check out our article “Stories for the Ages,” which appeared in the February 2019 issue of Viking.