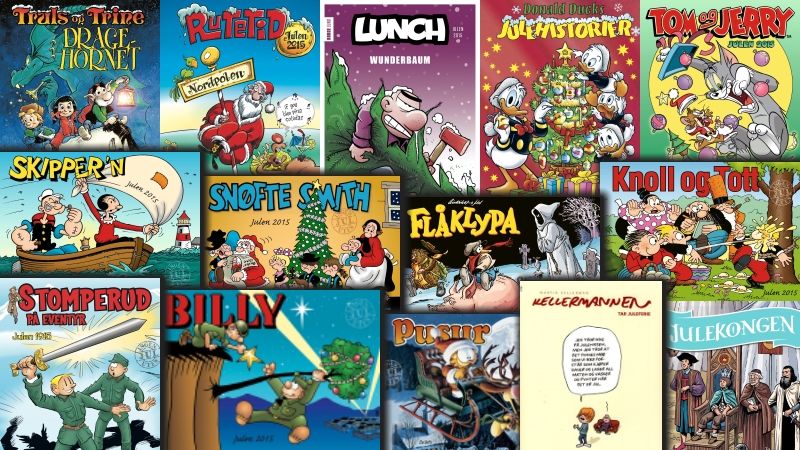 Classic Norwegian Christmas traditions include decorating the tree, baking cookies, visiting family—and sitting by the fire with a big stack of comic books. For two centuries, Norway has had a tradition of releasing julehefter, or Christmas booklets, in late November. While the term julehefte has now become synonymous with comic books, these special releases were originally more literary journal than comic strip. The first julehefte, printed in 1817, was a collection of social and drinking songs by Norwegian authors. In 1845, the first children’s themes followed with Julegaven for det barnlige sind, or “The Christmas Gift for Childish Minds.”

By the end of the 1800s, hundreds of titles were available with a variety of themes such as art, literature, recipes, activities and religion. Vibrant illustrations adorned the covers with nostalgic Christmas scenes. Publishers paid handsomely for the booklets, so many famous writers contributed poems and short stories, such as Hamsun, Undset, Bjørnson and Ibsen.

The first Christmas comic is attributed to Knoll og Tott (the US cartoon The Katzenjammer Kids), published in 1911. Other favorites include Vangsgutane, Flåklypa and Stomperud. People tend to gravitate toward the comics that they grew up with. Other US cartoons have also thrived as julehefter, such as Donald Duck, Tom & Jerry and Tommy og Tigern (Calvin & Hobbes). Although The Katzenjammer Kids ceased production in the American market in 1979, the cartoon lives on in Norway.

These days there are around 50 Christmas booklets on the market, with some titles surpassing 150,000 copies sold. About half of the magazines are Norwegian originals. Knoll og Tott, Stomperud and Pondus remain the most popular comics, and the literary booklet Juleroser (Christmas Roses), first published in 1881, has been a top seller with recent texts by Herbjørg Wassmo and Karl Ove Knausgård. Relatively new themes to the holiday booklet scene include crime titles and political satire.