Even More With Sig Hansen 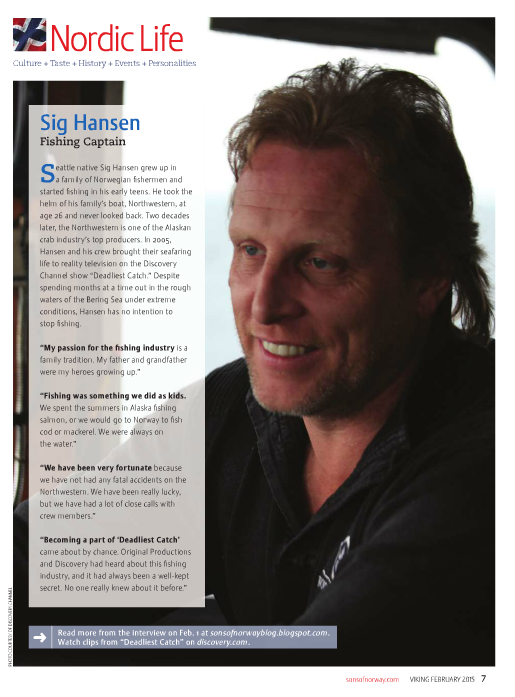 If you’ve watched episodes of The Discover Channel’s “Deadliest Catch,” you’re probably familiar with Norwegian fishing captain Sig Hansen. We had the pleasure of interviewing him for the February issue of Viking. Hansen helms his family’s boat, Northwestern, and is one of the Alaskan crab industry’s top producers. Check out his interview on page 7. Here are a few more quotes from Hansen about his seafaring life.

“The town that my folks were from in Norway was a fishing village. The main thing they did was herring and cod. My grandmother would work at salting the herring and then put them in wooden kegs. Fishing has always been a big part of our lifestyle. Not just the Norwegian heritage, but for our family.”

“We like to keep the same people on board. If you pay well, and you get the same guys returning, it makes the whole operation a lot safer because we have a crew that knows the boat and has a routine. If you take five new guys and have them on a boat that they aren’t accustomed to, the odds are that bad things are going to happen. Every boat is different, and that is why we like to keep the same people.”

“You’re in charge of your business, your own destiny. And that is a nice feeling. I really appreciate what I have! Most people look at us like we are nuts, but the reality is, I don’t think we are crazy because we know what we are doing.”

“When we were younger, we could be gone anywhere from eight to 11 months. Now, depending on what we participate in, we are gone for four to six months for King Crab fishing.”

By Sons of Norway|March 4th, 2015|Categories: Blog|Tags: Nordic Life, Viking magazine|Comments Off on Even More With Sig Hansen