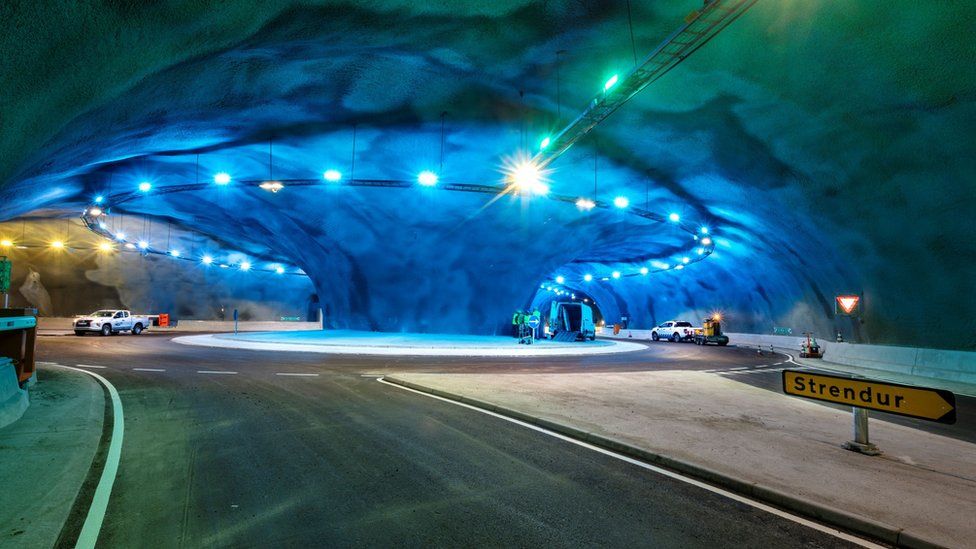 Living on an island nation has its challenges, not the least of which is transportation. In the year 2000, the government of the Faroe Islands approved construction of the country’s first underwater commuter tunnel. A boon to air travel, the tunnel made it easy to drive between the airport on Vagar island and the capital city of Tórshavn on Streymoy, the largest of the islands. Building on that success, in 2014, the Faroese parliament started planning an even more ambitious underwater endeavor.

After three years of construction, the new “Eysturoyartunnilin” tunnel system was opened for commuters in December of 2020. At the heart of this unusual road network is the world’s first underwater roundabout.

Glowing like a primodial jellyfish near the eastern end of the concourse, the massive traffic circle—like the rest of the nearly 7 mile tunnel—features walls that appear to be rough-hewn out of the sea bed itself. Eerie shapes are illuminated by washes of yellow, green and blue light, reminiscent of an underground aurora. A metal sculpture created by renowned Faroese artist Tróndur Patursson wraps around the core of the roundabout, featuring human silhouettes performing a traditional circle dance.

While beautiful, the tunnel is of course also practical. It has reduced travel time between the capital city to the busy sea port of Runavík from 74 minutes to only 16 minutes, offering a great convenience for residents and tourists alike. Entering the tunnel costs a toll of about $12 one way, but locals can sign up for a yearly pass to reduce the expense.

The Faroe Islands now features a total of 19 traffic tunnels connecting its 18 major islands. A 20th tunnel is under construction and will connect Sandoy and Streymoy.

Norway’s neighbor to the west

The rugged Faroe Islands rise from the frigid north Atlantic about halfway between Iceland and Norway, and only 200 miles northwest of the Shetland Islands of Scotland. After wresting control from the Irish monks who first inhabited the islands, the Vikings made themselves at home starting around 400 to 600 AD. Medieval visitors referred to the islands as a paradise of birds, and were impressed by the vast crowds of sheep that roamed freely in the green, rocky and treeless landscapes. The archipelago became a part of the Kingdom of Norway in 1035, but was taken over by the Danes in the late 1300s.

Now home to about 53,000 people, the Faroe Islands is a self-governing archipelago of 18 islands, though it is still officially part of the kingdom of Denmark. The primary language is Faroese, whose closest linguistic cousins are Icelandic and Old Norse. Scandinavian culture and heritage persist in the Faroes, as do the sheep, which now number in the 70,000s.