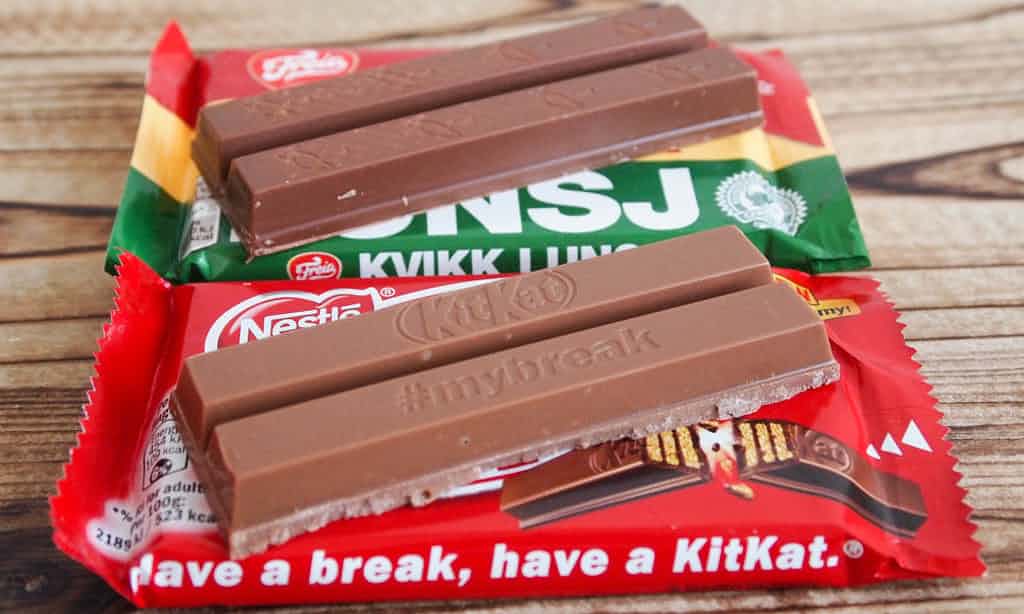 Norway’s Kvikk Lunsj and England’s Kit Kat have long been the subject of comparison – Which came first? Which tastes better? Who has cooler packaging? Recently the candy bar war has extended to “Which one should own the trademark to the four-bar shape?” (Spoiler alert: neither one.)

While Kit Kat began production in London in 1935, Freia started producing Kvikk Lunsj (“Quick Lunch”) in 1937. The son of Freia’s factory owner Johan Throne Holst had tried a Kit Kat while visiting England and his father came up with a similar product for the Norwegian market after consulting with Kit Kat’s producer. The four-bar look remained consistent, but the recipe was adapted to Norwegian tastes and changed the packaging to a wrapper with red, yellow and green stripes.

Various bloggers have made reviews of the two candy bars or held blind taste tests. A reporter for British newspaper The Guardian rated the two bars based on look, feel, snap, chocolate, nibble-ability and texture, with Kvikk Lunsj winning handily, 24-17.

While Kit Kat is sold worldwide, Kvikk Lunsj is only sold in Norway and in the duty-free shops in Sweden and Denmark. The cultural connotations of Kvikk Lunsj are deep:  the candy has been associated with hiking and skiing adventures and Easter holidays, when many Norwegians visit rustic mountain cabins. First marketed as “tursjokolade” or touring chocolate, it’s often paired with coffee and oranges as the perfect trail food. On average, Norwegians consume nine Kvikk Lunsj bars per year, with one third of them consumed at Easter.

It’s clear that Kvikk Lunsj is more than just a candy bar to Norwegians. Its name has been hashtagged 46,000 times on Instagram, largely in rugged outdoor settings. You can find a Kvikk Lunsj hat pattern, purchase cufflinks and—of course—make your own wool hiking socks. The product is so closely associated with friluftsliv (outdoor recreation) that Freia has incorporated maps, hiking tips and portraits of famous trekkers on the packaging.  An ad campaign, “The Tour Awaits” was created for Kvikk Lunsj’s 80 year celebration. The spot portrays how closely hiking culture and Kvikk Lunsj are related.

By Jana Velo|August 17th, 2018|Categories: Blog|Tags: Norwegian culture|Comments Off on Kvikk Lunsj and the Candy Bar War
Go to Top