Norwegian professional drift driver Fredric Aasbø has the need for speed. He fell in love with cars at the age of five and raced go-karts as a teenager. Aasbø made a splash on the drift-racing scene during his rookie year in 2010. Today, the 29-year-old is part of a California-based team that travels the world competing in races. This summer and fall, catch him at racing events in the United States, Canada and Norway. Check out his interview in Viking’s July 2015 issue and read more below.

A: I grew up just outside of a little Norwegian town called Ski in a quiet neighborhood. The funny thing is, I hated cars at first until the age of five. When I turned five, it just clicked. I started racing lunch cars and building Lego cars like crazy. I raced go-karts from the ages of 12 to 15. 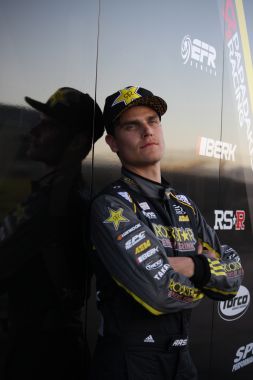 Q: How is drift racing different than other types of racing?

A: We’re in a world where racing is becoming more and more homogenous. To drive these cars, you have to fit the same mold to even get into the cars. Drifting is the opposite. It really allows you to express yourself and have your own style.

Q: What are some of your hobbies?

A: I love to surf. I’ve picked it up over the past couple of years, and I love it. It’s fun, a good workout, and you get to explore while catching some waves. The mental game of surfing is very similar to drifting because it’s all about being patient and waiting until a big wave comes along. It’s about controlling the situation in a scenario that may seem uncontrollable.

By Sons of Norway|July 1st, 2015|Categories: Blog|Comments Off on More With Fredric Aasbø