In the January 2016 issue of Viking magazine, we caught up with professional snowboarder Ståle Sandbech. The 22-year-old hails from Rykkin, just 30 minutes outside of Oslo. He’s been snowboarding since the age of eight and had the biggest moment of his career in 2014 when he won a silver medal at the Sochi Olympic Games. At the end of this month, Sandbech will be competing at the X Games in Aspen. Read more from the interview below. 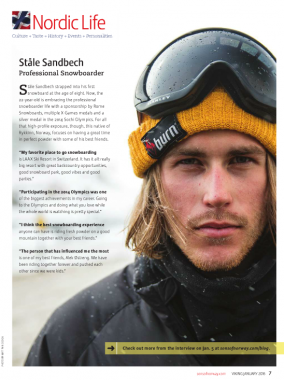 How has growing up in Norway influenced your decision to pursue a career in snowboarding?

We have a lot of good snowboarders in Norway and a really good community, so I got hooked right from the start. It became my biggest dream.

I just snowboarded and had fun. I was a kid doing what I loved, so it came pretty naturally to me. We didn’t really have any half-pipes in Norway then—I pretty much only did it during contests. Slopestyle was my main thing, but they did not have it in the Olympics at that time.

You have a silver medal from the Olympics. Is it your goal to now win a gold medal?

Yes. For me, getting gold or making it to the podium in every contest I attend is a goal.

What are you up to this winter and what are your goals for the next five years?

This winter I will keep doing a lot of contests—Air&Style, X Games, LAAX Open and World Championships in China.

How do you prepare and practice new tricks?

We just ride all the time. When you have the right day and the right jump, you may try out a new trick. The level of snowboarding is so high right now, so we normally need bigger jumps and really perfect conditions to try big tricks. A lot of the times we learn new tricks during a contest, as they often have bigger jumps than the public park.

At the moment my favorite trick is probably just a simple backside 180.

What other athletes do you admire, and why?

I take inspiration from all snowboarders out there, but growing up I really looked up to Eero Ettala, JP Solberg and Mikkel Bang. I admire a lot of athletes from different sports too. Every top athlete is unique. And watching documentaries is really inspiring and helps give motivation to push it harder in what I’m doing.

By Sons of Norway|January 5th, 2016|Categories: Blog|Comments Off on More with Ståle Sandbech