Learning about your Nordic heritage doesn’t require a trip to Norway. There are plenty of opportunities for North Americans to have those cultural experiences closer to home. In the May 2016 issue of Viking, we highlight museums, monuments, historical sites and educational centers in the United States and Canada worthy of a family road trip. Looking for more ideas? Read on! 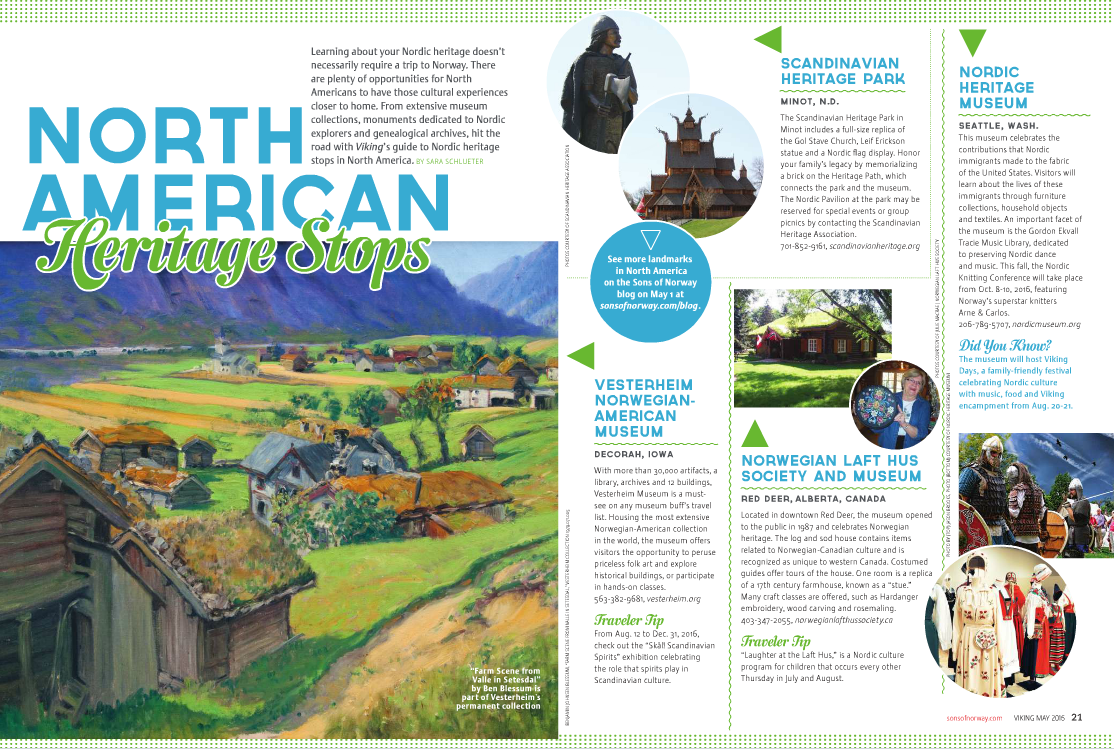 This museum is home to the famed Kensington Runestone, an intriguing artifact discovered in 1898, clutched in the roots of an aspen tree on the Olof Öhman farm near Kensington. Check out a 40-foot-long replica Viking trading ship called “Snorri,” and see country’s largest Viking, Big Ole, which stands 28-feet tall. Learn how Norwegians lived throughout history by touring a replica Viking home and a 1800s log cabin, which was inhabited by a Norwegian immigrant family.

Erected as a tribute to the first Norwegian settler in Washington State, Zakarias Martin Toftezen, his body was in an abandoned cemetery in Oak Harbor, then moved to Stanwood, one of the largest Scandinavian populations in the state. The Stillaguamish Valley Pioneer Museum and the Sons of Norway sponsored the monument, and King Olav dedicated the memorial in 1939.

The name “livsreise” translates to “life’s journey,” which fits this new heritage center dedicated to Norwegian heritage. This center features special exhibits, emigrant storybooks and an auditorium with presentations focusing on Norwegian culture, history and much more. Visitors can also begin the journey of discovering their own Norwegian roots, as the genealogy center was opened in conjunction with the Norwegian American Genealogical Center and Naeseth Library. Here, visitors have access to online databases to view records and census data.

Fargo is home to one of three bronze statue replicas of Rollo the Viking leader (the others reside in Rouen, France, and Ålesund, Norway). Fargo acquired the statue in 1912 when word got out that one of the statues would be sent to the United States where the highest percentage of Norwegian settlers resided. The bronze statue originally stood by the Great Northern Railway Depot, and now stands near the entrance to the Sons of Norway Kringen lodge.

Known as the “Viking of the Sierra,” John A. “Snowshoe” Thompson came to the United States from Telemark, Norway, and delivered mail between California and Nevada on a pair of homemade skis—sometimes braving large snow drifts. A statue now stands in his honor in Mormon Station State Historic Park. This summer marks the 15-year anniversary of the dedication of the Snowshoe statue, and a celebration with food and music will be held in the park on June 25.

As one of the original 11 countries that Disney brought to life at the Epcot as part of the World Showcase, the Norway pavilion has been a favorite for decades. Walt Disney World celebrates Norwegian culture with a replica Stave Church containing Viking artifacts, traditional folk art, which served as inspiration for the blockbuster film “Frozen” and a new attraction featuring characters from the film. At the Akershus Royal Banquet Hall in the World Showcase, visitors can enjoy “Taste of Norway,” featuring traditional cuisine, such as pan-seared salmon, and kjøttkake (a Norwegian meatball dish).

Located in Iowa’s prairie land on the east edge of Lake Mills is a sculpture depicting a Norwegian immigrant family in the 1860s. This particular sculpture celebrates those immigrants who settled in the prairies of the upper Midwest in the 1800’s. The sculpture can be viewed year round from daylight to dusk.

By Sons of Norway|May 1st, 2016|Categories: Blog|Comments Off on Nordic Landmarks in North America