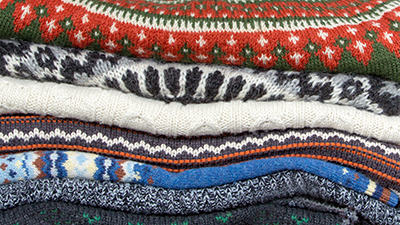 Norwegian wool sweaters are something we associate with tradition, cozy warmth and, if we’re lucky, the people who knitted them. But did you know that they were made to protect us not only from cold, but also to ward off malicious spirits?

First, a language nuance: a genser is a pullover-style sweater, and a kofte is a knitted jacket, often with shiny pewter clasps. Up until the 1800s these fortified garments were hardy work clothing; kofter were made for farmers and fishermen.

The patterns made by dual color strands not only protected the wearer from the cold, but also—it was believed—from malicious spirits. The superstition was that evil could sneak in at the hems of a person’s clothing. To confuse any menacing forces, the sleeves, neck and lower hem of a sweater were adorned with intricate zigzag, checkerboard, X and V patterns.

Here’s a bit about each of the most prominent sweater patterns:

Setesdalskofte also called a lusekofte (lice jacket), for the white V-shaped stitches that are regularly knitted into a darker color, to provide extra warmth. This pattern comes from Setestdal, a valley in southern Norway. The shoulder and chest feature rows of repeating Xs and diamond shapes and the borders are finished with red and green trim.

Mariusgenser
Typically knitted in the colors of the Norwegian flag, the Marius sweater is a story of product-placement success. Skier, fighter pilot and movie star Marius Eriksen wore this sweater in the film Troll i Ord and his celebrity status helped the pattern take off.

Fanakofte
The Fanakofte named for the municipality south of Bergen combines several motifs for the ultimate pattern mash-up: checkerboard, 8-pointed roses, and “lice” within stripes. This striking sweater is usually knitted in white and with a colorful yarn for the patterning.

Selburose A motif in both the Fanakofte and Mariusgenser, the Selbu rose is an 8-pointed octogram, sometimes perceived as a snowflake or star. Teenager Marit Guldsetbrua Emstad of Selbu (near Trondheim) knitted the first “snowflake mittens,” and the pattern put her town on the map.

No longer strictly for outdoor work or spiritual protection, Norwegian sweaters are a cozy mainstay that transcends all styles: skiers, royals, punk rockers and politicians have all been known to wear them.