Today, beautiful woolen sweaters are emblematic of Norwegian culture. However, the art of knitting is relatively new to Norway. Sweaters were originally a luxury imported from Europe until the early 1800s.  When faced with shortages precipitated by the Napoleonic wars, Norwegians embraced the challenge, grabbed some needles, and began entwining their own traditions into this formerly exotic art form. 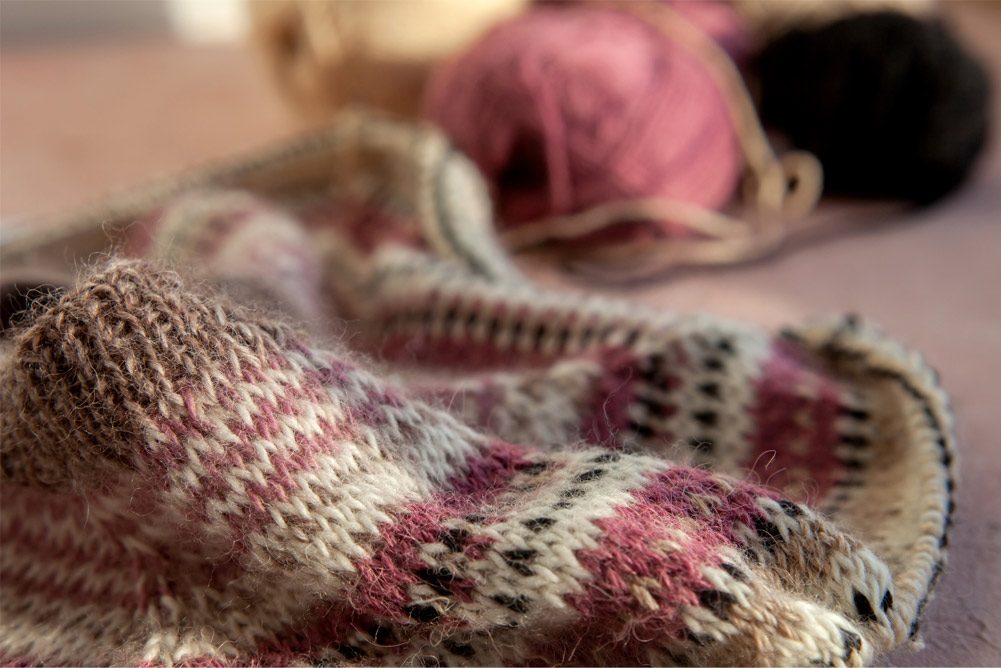 Annemor Sundbø, known as the “Norwegian Sweater Detective” has dedicated her life to ferreting out the secrets behind the techniques and patterns found in Norwegian knitting.

She began her professional life as a spinner and weaver, teaching her craft all over the world. Returning to Kristiansund in 1983, she approached a local mill owner about learning to use his industrial looms.  The mill owner was happy to let her use the looms all she wanted, but she would have to buy the factory first! So, she did.

Her purchase was the last shoddy mill in Norway. This kind of mill doesn’t use new yarn, but tears apart old garments as a form of recycling, re-spinning and re-dyeing the wool to weave into new textiles. Along with the coveted industrial looms, Sundbø found she had purchased 16 tons of old sweaters, mittens and socks, which were 30 to 100 years old. While sorting through her hoard, she realized it was a treasure trove representing the work and innovations of thousands of Norwegian women throughout the past century. These cast-off garments contained captivating clues, not only about everyone’s favorite sweater designs, but about ideas and beliefs reaching up through the ages from deep within the Norwegian psyche. Sundbø believes that when a woman knits or weaves, “she is also affecting the fate of the person who will wear the garment, if she does it right. What you will be wearing will affect your destiny.”

Sundbø has written awarding-winning books on Norwegian textiles and her salvaged sweater collections have been celebrated at the Setesdal Museum and other museums throughout Norway. Today, she lives in the village of Ose, Agder, with her husband and the echoes of a thousand antique knitting needles and looms.