Sour cream porridge with dried meats was festive food in the olden days and is still considered that today. Sour cream porridge must be made from high fat (35%) natural sour cream, with no stabilizers or gelatin added. For the best results, use homemade sour cream- a recipe is included below. 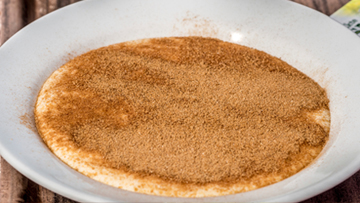 Sift in ⅓ of the flour and stir. Simmer until the butterfat begins to leach out. Skim off the fat and set aside.

Sift in the remaining flour, stir, and bring porridge to a boil. In a separate pot, bring the milk to a boil. Add milk to the porridge one cup at a time, whisking each time before adding more. Whisk porridge until smooth and simmer about 10 minutes. Season with salt. In a small bowl, mix sugar and cinnamon together. Enjoy the rømmegrøt with melted butterfat and cinnamon sugar sprinkled on top.