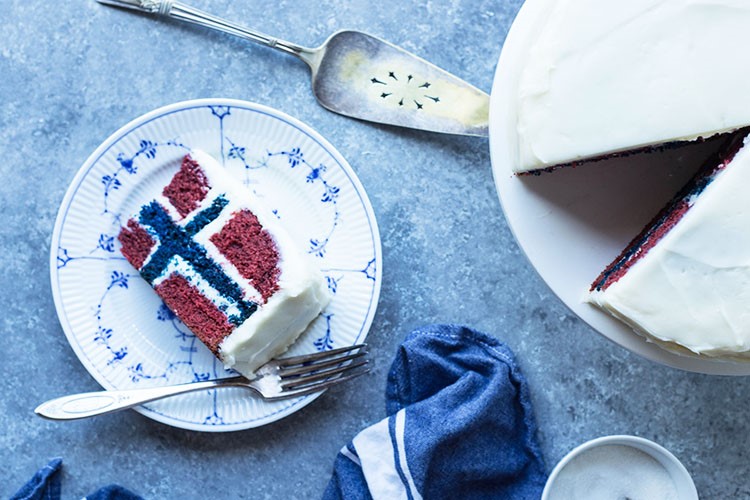 Butter and flour a 9” × 3” round springform pan and set aside.

Cream the butter and sugar until light and fluffy. Add the eggs and continue to mix until combined.

In a small bowl combine the cocoa with the red food coloring. Add to the egg and butter mixture and stir to combine.

Sift the dry ingredients together and set aside in a medium bowl.

Mix together the buttermilk and vanilla, and add 1/4 cup at a time to the dry mixture while the mixer is running on low. Add the flour alternately.

Combine the soda and the vinegar in a small bowl and add to the mixture.

Stir well and pour into the prepared pan. Bake for 35-40 minutes or until the cake begins to pull away from the sides of the pan.

Cool 20 minutes in pan, then remove from pan and allow to finish cooling on a rack.

Cream the butter and sugar together until light and fluffy. Add the vanilla, then the confectioner’s sugar, and mix until thoroughly combined.

Cut the red cake in half horizontally and set aside. Remove the rounded top from the blue cake and discard or save for another use. Cut the remaining blue cake into two horizontal, equal portions.

Use the 9 cm cutter to cut two circles (side by side) from one of the blue cakes. Use the 7 cm cutter to make circles inside the 9 cm circle cakes. In this case you will discard the center circles but keep the thin blue rings. Place one of these blue rings in between the small and large red circles on the cake plate.

Use your piping bag and icing tip to gently fill in with frosting between the red and blue layers. Avoid icing the top of the blue circle. You want the icing to be in between the rings. Now use additional icing to ice the tops of the red portions of the cake.

If needed, add some blue cake crumbs to make the blue circle flush with the top of the icing over the red cake. Now lay the second horizontal half of the blue cake over the top. Place the second blue cake ring on top of it. Use your piping bag to ice the bottom of the center ring and all around the outside of the ring on the larger blue portion of the cake. Place the second, small red circle inside the blue ring, and the larger red ring around the outside of the blue ring.

Once more, use your piping bag to fill the spaces between the rings with icing. Now cover the entire cake with the remaining cream cheese icing, smoothing with the offset spatula, and refrigerate until ready to serve. Serves 8-10.

To get a visual of the cutting and assembly process, view step-by-step photos on godt.no.